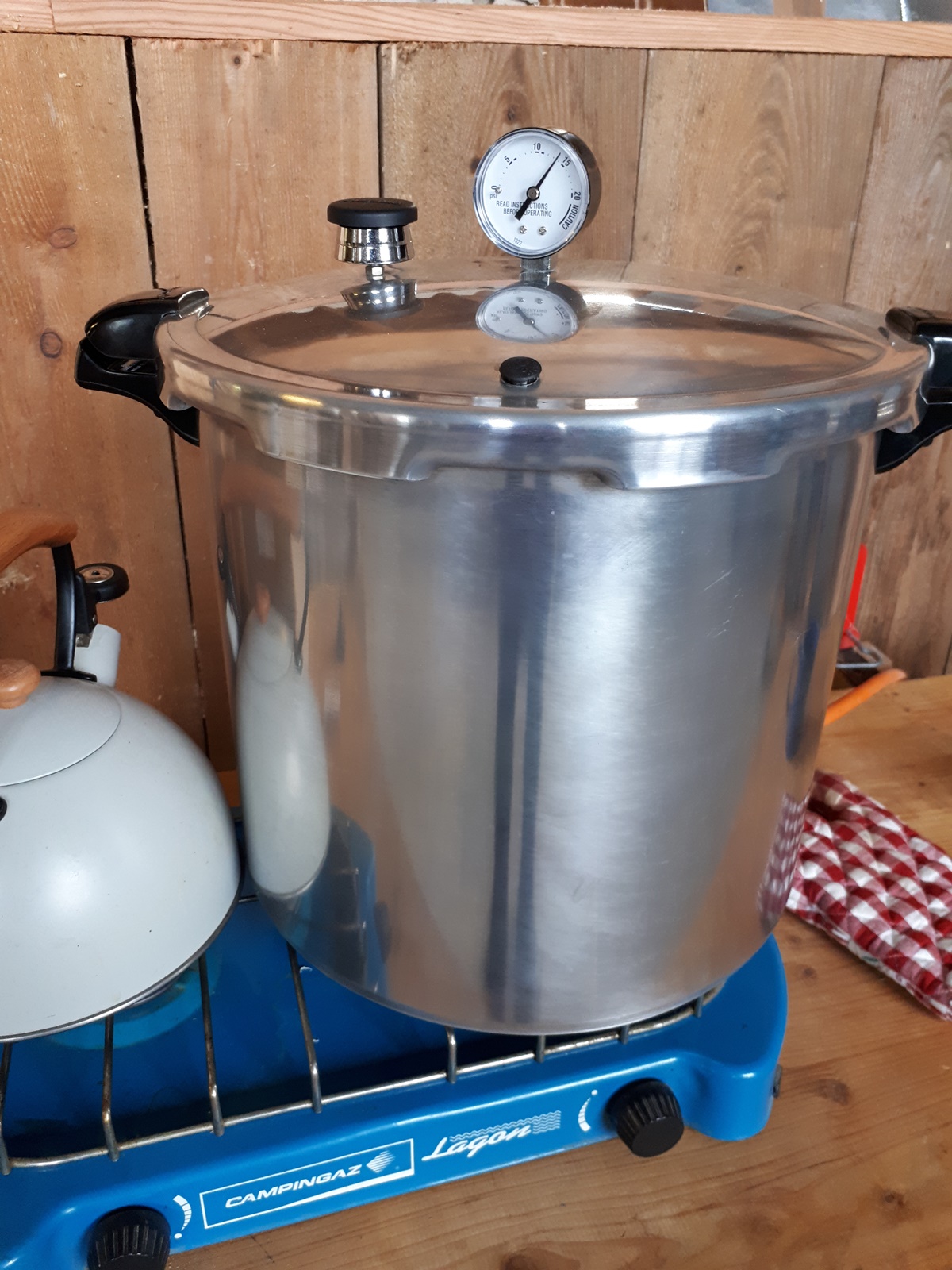 I have been watching a number of American people on YouTube using a pressure canner and gotten interested in this way of preserving. Putting everything in the freezer is convenient, but often I forget to thaw things on time. A freezer also uses power all the time while canned goods just need a frost free storage. Another thing is that it is difficult to take a freeze with us while traveling as on the other hand canned goods can be packed easily.

A little afraid to use it I first read the instructions a few times and had to wait until my husband had finished reorganizing and cleaning the barn. This needed to be done because he wanted to park our caravan in there for the 2 weeks we plan to go onto a holiday. Also the space and a somewhat clean barn were needed to process the butchered cow. After that we set up our camping gas stove in the barn. In preparation I had thawed 4 chickens and my husband cut of the filets and the legs. We grilled the chicken legs for lunch. They where very good with a peanut butter sauce.

I wanted to pressure can the filets. I put the pressure canner on the stove with the needed amount of water and turned the heat on middle. I put 5 pcs of ½ Liter glasses in the pressure canner to warm up with the water. I collected everything needed on the table and cut all of the filets in usable pieces. By the time I finished cutting the filets the water had warmed enough and I packed the meat in the glasses. The amount of meat was exactly right for the 5 glasses and I returned the glasses to the pressure canner and closed the canner. I left the heat on middle and waited for the steam. After 10 minutes of steaming I put the weight on and kept an eye on the pressure gauge. We are on a low altitude, so I need to pressure can with 11 psi. It took a little for the canner to reach that pressure, but since I did not put the burner to high it was relatively easy to adjust the heat and keep the pressure above the 11 psi. After the canning time was done I turned off the burner and waited for the pressure to naturally release. After that I carefully opened the canner and took out the glasses. It was interesting to see how the moisture in the glasses was still bubbling.

I took the glasses inside to cool down gently, because in our barn we only have about 12-15°C. As I understand the glasses shut not cool too quickly.

Once the meat was finished I took the canner of the stove and put my stockpot with the 4 carcasses on there to cook for the broth. I had only the chicken carcasses and water in the stockpot and had this simmer for about 5 hours, strained it and let the broth cool over night. (I had been making broth often before, but it did not smell so good and the kid’s did not want to eat things I made with it. Recently I have found out by searching in the internet that for broth, simmering for a longer period of time, you should not add vegetables, because the broth can turn bitter.) The next morning I separated the fat from the broth and heated the broth again. At the same time I heated the pressure canner with water and ¾ Liter glasses. Once the broth came to a boil I took the glasses out of the pressure canner and filled these with the broth. The amount of broth was exactly right for the glasses and the pressure canning process started again.

While canning the broth I used a glass of meat for an easy meal. I made Tai curry chicken with Quinoa. The meat was great. It did not become so dry as chicken meat usually does. We found it a success.

I have lost my “fear” for the pressure canner and want to pressure can some beef and soups as well. I am going to look for some recipe books about pressure canning to see for variations and what can all be canned this way. I think I have found a new hobby.

Hello, we are Sebastiaan & Carolien, parents of 3, with 5 dogs and 4 cats. We love our kids, animals, gardening, nature and wood working. Thanks for following along. And we would like to take you along on our beautiful chaotic journey which is called our life. View all posts by beautifulchaosorg

Hello, we are Sebastiaan & Carolien, parents of 3, with 5 dogs and 4 cats. We love our kids, animals, gardening, nature and wood working. Thanks for following along. And we would like to take you along on our beautiful chaotic journey which is called our life.